How do you pick where you live?

Every time Alex and I get home from vacation, we want to move.  We long to live somewhere with cleaner air, maybe even a beach to run on with the dog.  Somewhere you can comfortably walk to town from your house or apartment, where the car is less important than it is in suburban Sacramento.  Our wish list goes on– less heat, more connection with the outdoors, you get the picture.

But does this place exist?

Yes, I’m certain it does, but not without trade-offs.  It probably costs more than Sacramento, not to mention that our jobs are here.  The irony, is that we already had much of what we were looking for when we lived in Berkeley, minus the right jobs.  Walkable urbanism, nearby coastline, no need for a car until it was time to drive back to Sacramento to see family.

But, therein lies the catch.  We, or as my husband likes to point out, I, wanted to come back to Sacramento all the time for family events.  My family is big and close, so there is always something worth coming home for.  Eventually, we realized we could live in a house in Sacramento and not drive back and forth all the time for the same price as our tiny North Berkeley apartment.

We also recognized that life was pretty much the same in Berkeley as it is in Sacramento– jobs, dinner, exercise, sleep, weekends.  However, ironically, we traded friends for family returning to Sacramento, as most of our close friends have now migrated to the Bay.  This trade in itself is alright, family should come first, but the idea that life is the same wherever you live is a partial truth.  In the big ways, it is mostly the same, but in little, surprisingly important ways, it’s different.

We miss walking to the grocery store, running in the Berkeley hills to stare out at the Golden Gate Bridge instead of people’s unwatered lawns.  Jumping on BART to be in San Francisco, arguably my favorite city on earth.  Our weekend jaunts to the Pelican Inn, only forty minutes to enjoy the ocean.  So many things, really.  And, to be fair, there were also downsides: expensive rent, earthquakes, small/noisy living space, mentally ill bums defecating outside our front door… Alright, Berkeley was not perfect either.

I get that life is trade-offs.  You pay more for less in places that are most desirable.  You leave behind family and/or friends to chase different priorities.  But something makes me sad about prioritizing where I live above my family.  Then again, something makes me sad about not being able to comfortably breathe the air in the city where I live, at least in summer.  Don’t get me wrong, Sacramento has plenty of aspects worth appreciating, but the smog and sprawl really crawl under my skin.

Three years into our return, we’re at a precipice.  I want to spend one more year with my same students, as I loop fourth and then fifth grade, but after that, we’re thinking of leaving again.  For where, I’m not sure.  Carmel (more likely Salinas/Monterey/Santa Cruz), Portland, Ashland… The list is just beginning to form.  But, I have this feeling, that no matter what, I’m giving something up. Either proximity to my family or those other things I value.  My mom chose Mt. Shasta, my dad lives in Sacramento.  It’s in my blood to be torn.

The compromise, of course, would be to stay but try a different neighborhood, which is something we’re thinking about doing in the interim.  Small neighborhoods, like East Sac or Midtown, show glimmers of those things we like, but we’d likely have to rent instead of own, at least to have anything comparable to where we live now.  And, it would still not fix the smoggy air or stifling summer heat, let alone the lack of ocean.  No, not all of California is on the beach, (too bad, really).

I want to know, what have you picked in life?  The familiar?  The different but far away?  How have you coped with the compromises inherent in any of these choices?  Or, did you hit the jackpot– all the friends and family you could wish for in your ideal place to live?  I want to hear about your experiences as I think through my own future choices.  At the end of the day, I know happiness exists wherever you let it, but other places still call to me, particularly those places with crashing waves. 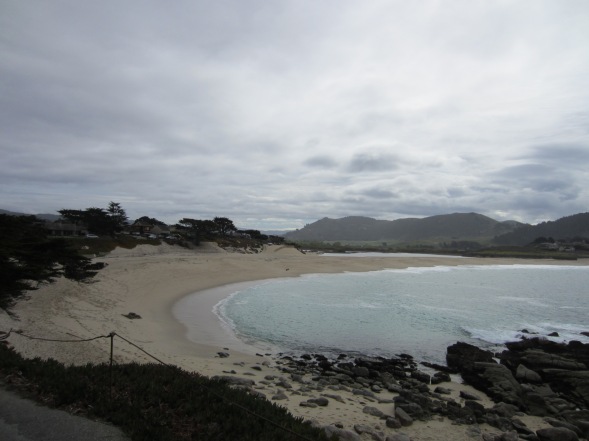 I think my first choice of places to live would be somewhere near Carmel (above), but my husband favors even rainier places like Portland or Dublin, (yes, really).  Above all, I find myself drawn to the sea.

13 thoughts on “How do you pick where you live?”