When I was a little girl, I would sit for hours in front of the hotel windows in San Francisco inventing stories about the people down below. My favorite was at night, when the streets were almost empty, and I could use a pair of binoculars to invent scenarios for the lone figures still roaming the sidewalks. I loved watching the cars spiral down from the tops of parking garages, the police cars patrolling late at night.

San Francisco was the big city, alive and wild. There were rules for how I walked on the inside of the street and held tight to my dad’s hand. These rules were exciting because they implied a certain danger as I grasped first his hand and then the crook of his elbow, my arm eventually through his as I grew older. Today we still walk those same streets arm-in-arm.

Visiting San Francisco each year to spend the night during the holidays was not just our family tradition through years of less and more, it was also an education in the world around me. Homeless people, transvestites, activists, street performers, doormen– these people were all less visible in my childhood version of Sacramento. Unsurprisingly, San Francisco fascinated me, the nexus of its existence Union Square, my family’s yearly destination.

When finally I was old enough to pick where to live on my own, it had to be San Francisco. In a misguided vision of starting my own sweatshop-free apparel company, I fell into a job managing a national apparel store in the Union Square shopping district. I only lasted two days, my college idealism short-lived when confronted with the realities of folding overpriced sweaters and teaching pretty teenagers to use cash registers for practically minimum wage in a city where renting a converted living room space from a newly-divorced law student cost me $1,100 a month.

Even though my first attempt at Bay Area residency only lasted mere days, there was still one single moment that stood out as one of those moments you hold onto forever. After work the first night, I climbed aboard the MUNI headed toward the Richmond District and found my seat on the crowded bus next to a stranger. It was dark and a group of my younger employees were huddled nearby chatting eagerly. They were stylishly clad in the clothes my company forced them to buy. I was too.

From the window, I could see the St. Francis, the same hotel my dad’s dad would take him to as a child, and where my dad took me and my brother to stare down at the tiny ant people on the street. In that moment, I realized I was one of those very people. I lived in San Francisco and was starting my very own grown-up story.

I was proud of myself for becoming a resident of the city my dad taught me to love. I independently navigated public transportation, just another face through the bus window that a visiting child might wonder about. Of course, that story was not the one I chose to keep. I went back to Sacramento just a couple days later, abandoning a hefty deposit, a disappointing job, and my childhood dream of starting my story in San Francisco. Of course, I returned again, more triumphant in my second round as an economic analyst in Berkeley, but that first round cemented my attachment to the San Francisco of my childhood, to Union Square.

Sitting in my St. Francis hotel room this morning, watching the sun rise over the bay, I could not help but again feel connected to these prior versions of myself. The little girl making up stories from 30 floors above Union Square. The teenager walking arm-in-arm with her dad. The recent college grad riding MUNI home from her first day of work in the big city. I may not live in San Francisco now, but Union Square is still a major part of my story. It’s the yearly destination for my family’s big December Christmas trip, and today the place I sat and reflected on life.

I could not help but think of the future versions of myself that will sit and look out over the same view five years from now, ten, twenty. My story is still unfolding. I’m excited to see what comes next.

Union Square at sunrise was not something I ever saw as a child.

In an effort to achieve balance, I didn’t bring my laptop on our little trip. So when I inevitably woke up wanting to write this entry, I had to write on thirteen little sticky notes that I stuck one-by-one on the window. 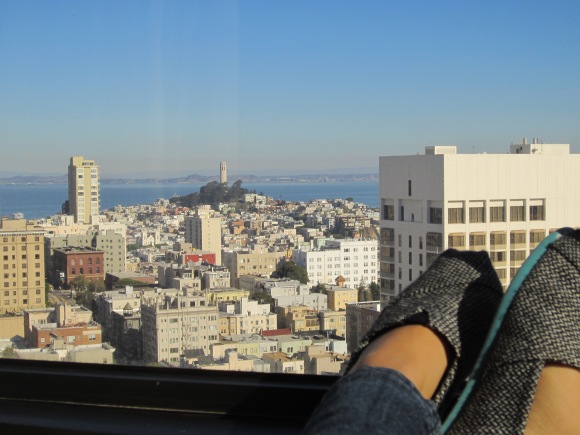 …still captivated by the view no matter how many years pass.