That’s what a woman at Costco said to me today. It was one of those lines that stick with you for the rest of the afternoon. Not because I plan to listen to her. Heck, I surround myself with 30 kids five days a week. I like them.

But, I also wonder how it will be different when they are my own. Right now I know 15 pregnant women. Of course, Facebook helps increase this total, but at least 6 of them I see regularly. Babies are everywhere I look. I guess that’s what happens when you’re almost 30. Eventually it will be my turn too, life willing.

This particular woman had two little ones under the age of 3. One in her cart, the other in grandma’s. “Please don’t touch the flowers, please don’t touch the flowers, STOP IT!!!” She lost her cool. As she shouted at the youngest, I realized what I must sound like when I lose my self-control at work. It doesn’t happen often, but occasionally I get really frustrated too. She turned to me, after aisles and aisles of keeping the same pace, and told me not to have children.

I felt for this poor woman. I could tell she was tightly wound and looking for perfection. A lot like me some of the time. I knew exactly what she felt like without even being a mom. I could imagine all the pressure. I could feel her stress in trying to maintain control. I could even see the exhaustion on her face.

I suppose in the beginning most parents have moments where they might say something similar to a perfect stranger, I just like to think I never will. I guess I have to actually have kids first to figure that out. Until then, I’m going to keep working on remaining calm in my classroom. I’m grateful to that woman for the reminder of what it looks like from the outside. I hope she finds some calm this weekend too. 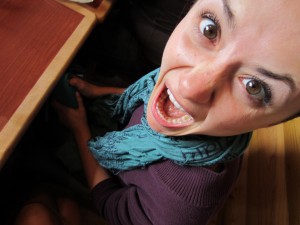 Proof I’m not always rainbows and gingerbread houses either… At least I have a sense of humor about it.

12 thoughts on “Don’t Have Children.”